The terrorist Abdel Nasser Qirdash,  from Tal Afar, fell in the grip of the Iraki intelligence and security services, after these latter exploited informations, also  received by the syrian competent authorities.

He is the person who was chosen to succeed the Caliphe of Islamic State, Abu Bakr al Baghdadi in the leadership of the terrorist organisation of Islamic State.  As he was holding   high positions in the organisation of ISIS, his capture by the Iraqi services was like a treasure   .  A real treasure  of informations about the organization’s structure and activities which will facilitate the country’s operations  striking terrorist positions and of arresting or killing  its criminal leaders .

The terrorist Al Makani Haj Abdul  Nasser Qirdash  who was supposed to succeed Abu Bakr al Baghdadi in the leadership of ISIS,
was born in 1967, in Tal Afar, and was living in Mosul, in the neighbourhood of Mushairefah.. 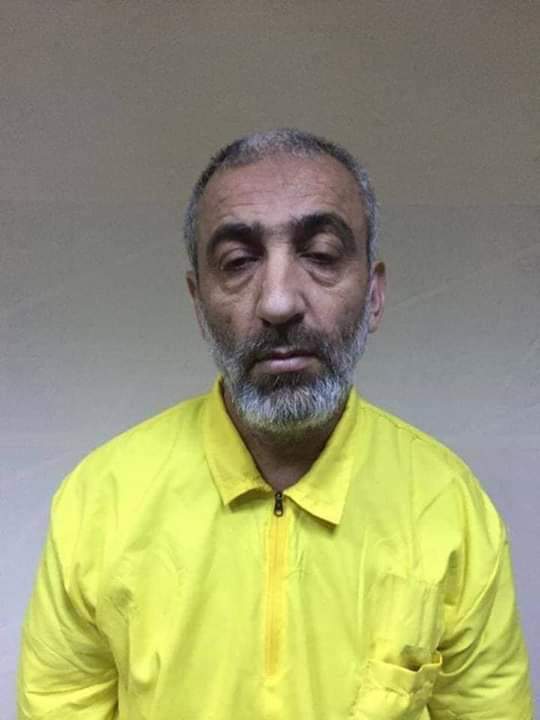 In 2007 he adhered  to the  Al Qaeda branch  of Nineveh Governorate and worked in an administrative post  in the state of Al-Jazeera until the end of the year.

He held the position of the governor of Jazera and during his tenure in office he carried out a number of terrorist operations targeting Iraqi forces and innocent citizens.

In the beginning of 2010, he was assigned by the governor of the north to act as his deputy and by order of the terrorist Abu Omar al-Baghdadi, he was appointed   governor of the northern states (south of Mosul, Mosul, Al Jazeera, and Kirkuk).
At the end of 2011, he met the great terrorist Abu Bakr al-Baghdadi at the outskirts of Baghdad Governorate.

The so called Caliphe,  gave to him the title and  post of “Emir of Industrialization and Development”.

After this service  Al-Baghdadi decided to send him in Syria for the development of the local production of weapons.  So, in Syria, the former Emir of Industrialisation,  established numerous factories as well as home made units that   supplied with weapons and explosives the members of ISIS operating in Syria,  It is said, that during his mission in Syria , he held meetings with Al Baghdadi for more than a hundred times.
After the splits  in  Al Qaida and the defection of Jabhat al-Nusra , he was assigned Governor  of the Eastern Region, including the provinces of Raqqa ,Deir Ezzor,  and Hasaka, the castles of Daesh in Syria.
Always by order of Al-Baghdadi, he was transferred to the post of governor of Al-Baraka, and after the proclamation of the caliphate, he was promoted  deputy prince of the supervising committee, and then Emir of the committee.
He was the first supervisor of the battle of Kobani and Palmyra when the Islamic State took the control of the cities, and  he was also supervisor for the battles of Aleppo, Damascus, and Al-Bab .
He had a great role in the recent Al-Baghouz events.
He was the Responsible for manufacturing, monitoring and developing the mustard gas that was used to target Iraqi forces .
He had a prominent role in most of the negotiations that took place between the organization of ISIS and orher takfirist factions and  groups .